Coach Wooden's answer to "What's in your Wallet?" - The Seven Point Creed

You've probably heard and/or seen the Capital One advertisement campaign, "What's in your Wallet?" Over the years, the company has enlisted many celebrities (e.g. Jennifer Garner and Samuel L. Jackson come top to mind). I suspect the meaning of the campaign is that it is prestigious to have a credit card with Capital One's name on it in your wallet... that's fair game... and I am good with catchy advertisements.

However, I can't help but to think about what John Wooden would answer if asked the same question.

While the most recognizable emblem of John Wooden is his Pyramid of Success, another well-recognized timeless totem is what's called "the Seven Point Creed" which was handed down to him from his father, Joshua Wooden.

Up until 2010 when he died, Coach Wooden kept a folded-up index card in his wallet with the handwritten Seven Point Creed that his father had given him as a graduation gift. 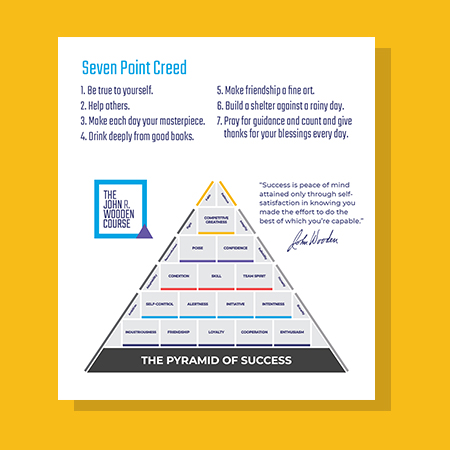 These seven points are:

Coach Wooden many times was asked if he followed and was able to live up to his father's creed. He would always chuckle softly and answer, "No, but I tried my best and that was all dad expected."

I do think what's in a person's wallet tells a lot about a person. Maybe test it... what exactly is in your wallet?

More information on the Seven Point Creed is featured in the book "Coach 'Em Way Up: 5 Lessons for Leading The John Wooden Way" - on sale now at all major retail outlets.

There’s no question we have all heard all about the strengths of great leaders throughout history...